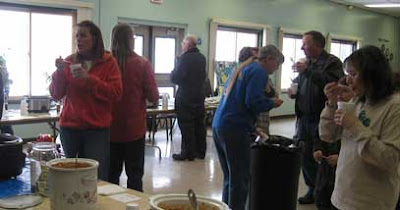 The Paradise Area Chamber of Commerce invited restaurant members and residents alike to participate in their second Chili Cook-Off.  One of the many activities of the 2017 Ice Festival held the last weekend in February.

The Chili Cook-Off provides Whitefish Township residents an opportunity to showcase the talents of many area cooks and ample opportunity for residents to ward off cabin fever.

At noon, chili tasters were encouraged to sample each of the  entries which included two "White 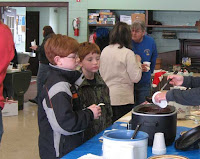 Chili" entries and one pulled pork variety.  All entries were anonymously identified including entries sponsored by area restaurants.  Tasters were provided a selection of soda crackers or corn chips to cleanse the palate and each sampling was served in a fresh cup to avoid a co-mingling of seasonings.

Many tasters found it frustrating to limit their selection to only "ONE" best chili.  Tasters commented frequently as to the quality of each entry. Conversation flowed as tasters attempted to identify ingredients!

Tasters were wowed this year by the number of entries, nine.  Even though tasters struggled to select only one "Best Chili", they selected a White Chili entry submitted by Lorrie Bicknell.  Lorrie was thrilled to be recognized among all the delectable options.

The Judge's Choice was a more traditional chili submitted by the Berry Patch in Paradise.  Even though the crew was exhausted by a full day of service to tourists and residents they were delighted to be recognized for their entry.  The photo on the left (left to right) is Grace Hildebrant, Shirley Clark, and Donna Knox.

Posted by UP Traveler at 9:57 AM No comments: