BEST OF THE LAKE 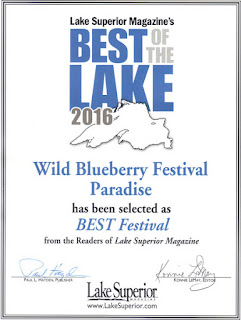 Lake Superior Magazine announced their Best of the Lake awards 2016 August/September issue.  The 2016 recipients in Best of the Lake Best Festival is the Wild Blueberry Festival, Paradise, Michigan; Best of the Lake Bird/Wildlife Watching is Whitefish Point Bird Observatory; and Best of the Lake, Best Rock/Agate Picking is Whitefish Point located just 11 miles north of Paradise, Michigan.  Lake Superior Magazine, produced in Duluth, Minnesota has provided readers an opportunity to recognize deserving establishments and locations since 1993. The four shores covered by the magazine include Michigan, Minnesota, Ontario, and Wisconsin.   Votes of fans and supporters were tallied and the results posted in the 2016 September issue and on their website, www.LakeSuperior.com.

The Best of the Lake Festival 2016 recipients included Bridgefest in Hancock Michigan and Soo Engineers’ Weekend of Sault Ste Marie, Michigan.  Identified as the best festivals in Minnesota were Tall Ships, and Bayfront Blues held in Duluth and the Fisherman’s Picnic, in Grand Marais, Minnesota.  In Ontario, Bushplane Days of Sault Ste. Marie, Ontario and Live from the Rock Folk Festival in Red Rock, Ontario. While the Bayfield Apple Festival of Bayfield Wisconsin and the Fourth of July on Madeline Island completed the list of Best of the Lake Festival recipients for 2016. 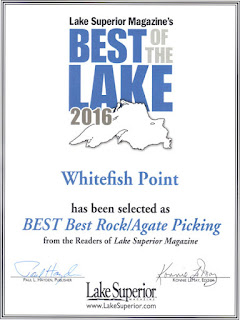 Where are the Best of the Lake, Best Rock Agate Picking?  Little Girl’s Point near Ironwood along with Whitefish Point rounded out the recipients for Michigan.  In Minnesota, Brighton Beach near Duluth and Beaver Bay were recognized by their rock hounders.  While in Ontario, be sure to stop at Goulais Bay and Nipigon’s Agate Beach.   Wisconsin’s Along Big Bay off Madeline Island and Saxon Harbor completed the list of Best Rock Agate Picking of the Lake. 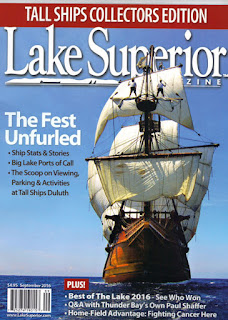 Be sure to pick up your copy of Lake Superior Magazine for a broad spectrum of Bests.  This 2016 edition is the Tall Ships Collector’s Edition and filled with information and images to delight your spirit.  The folks in the Paradise area have always known that the Wild Blueberry Festival was special, rock hounding at the point ideal, and bird watching at Whitefish Point Bird Observatory surreal.  It is just really nice to be endorsed by others through such a fine tribute.