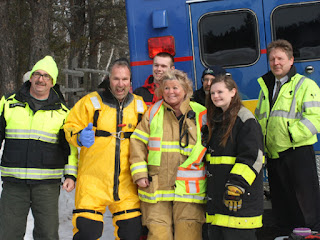 On February 27, 2016, the Second Annual Polar Plunge was held at Andrus Lake, near the intersection of North Whitefish Point Road and Vermilion Road, north of Paradise in the Upper Peninsula of Michigan. The Polar Plunge is one of several activities the Paradise Area Chamber of Commerce organized and promoted as a part of the 2016 Ice Festival.   By the end of February, residents of the Whitefish Point Region often finds spring to be elusive for another month or two. Cabin Fever starts to get a foothold infecting residents near and far.  The frigid temperatures of 2014 and 2015 substantiated the need for just such community activities to celebrate the conditions that make us unique and engage the entire family:  Ice Fishing Contest, Pancake & Sausage Breakfast, Ice Sculpture Contest, Chili Cook-Off, Snowshoe Hikes, Lantern Lit Ski Trails, Snowmobile Safety Class and Ice Swap Meet.  The Polar Plunge can not happen without the support of the Whitefish Township EMS and Fire Department.

The Polar Plunge serves as a means to raise additional funds for the Whitefish Township Emergency Services which includes the Whitefish Township Fire Department and the Emergency Medical Technicians.  This year the chamber offered participants two strategies to raise funds:   a challenge and or sponsorships.  While Internet social networking sites are popular and a lot of dialog included conversations about the plunge, official challenges had to be posted at Paradise Foods, downtown Paradise.  One resident could challenge another resident to JUMP for a specific amount of money. 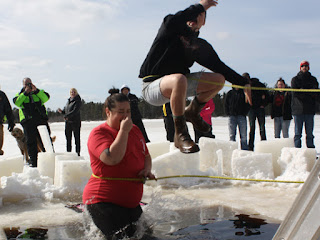 The challenged has several  options:  a) reject the challenge, b) negotiate a higher amount, c) find someone else to jump on their behalf and maybe sweeten the pot, or d) JUMP.  In options c and d, the challenger has to pay up.  If someone wishes to jump, they may approach a business or organization and offer to wear a shirt with their logo for a negotiated amount of money.  A Jumper may collect as many sponsorships or challenges as possible.  All of the money goes to a great cause.  Community conversations related to the Polar Plunge preceded the event by nearly eight weeks as challenges, sponsorships, and nerves were collected.

A number of people contributed to this entire project:  Snow had to be cleared (Many thanks to Bolz Construction.)  The ice (8 inches thick this year) had to be cut, Charlie Jacques and his crew did a great job!  Joann Cook, PACC Vice President, oversaw the entire event including the validation of several challenges.  Sue Anway aided in getting the eager plungers to sign waivers and collect funds. Many were very grateful to Roger Clark and his ice shanty, the shelter, heat, and refuge that it provided was invaluable.  Two kind, local photographers contributed their skills capturing some mighty cold moves. Each of them caught by the other in these next two candid shots. 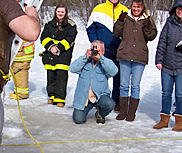 $360 was raised by this tiny band of brave souls. Afterwards, ideas were shared among the coordinators as to how this event might be improved for 2017, the last Saturday in the month.  Ice cutters, emergency crews, and snow removal crews have been locked in.  Last year, the Yooper Sauna Company added to the festivities, may be they would return if we reached out earlier in the year. The action could start a little later in the afternoon.  The Chili Cook-Off participants wanted to get in on the fun, so next year we'll start at 2:00PM  maybe the air will be a bit warmer.  The T-shirt idea was great!  Nice work Tanya!  If we offered shirts to the brave souls that take the plunge in 2017, the plungers could wear the shirt as a badge of honor, so deserved!   For your enjoyment and our reminder of a great time, here are a few additional shots you might enjoy! (Note that very clear, reflective water!  Only in the Purest of Pure Michigan, the Upper Peninsula.)

In this first event there were four entries, Vegan Chili, Cincinnati Chili, Chili Picante, and  D & B Chili. Contestants set up prior to noon, provided a copy of their recipes, and provided sufficient quantities of their chili to offer as many 50 miniature servings to taste testers.  From noon until 1:00 PM approximately 22 tasters stopped in and sampled this variety. Two tasters had been prearranged to serve as judges. The chamber provided insulated cups, spoons, napkins and soda crackers to cleanse the palette between samples.  One of the contestants provided corn chips and an assortment of sauces to either add heat or lower the temperature of the chili in accordance to your preference.  Contestants were encouraged to decorate their station as much as they wished and could visit with tasters or permit tasters to serve themselves. 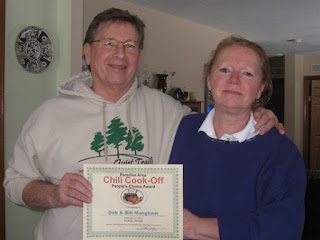 The biggest delight of the day was the relaxed atmosphere as people meandered about from crock pot to crock pot, asking the cooks/chef's a variety of questions and then tasting.  A number of conversations were struck among the tasters, oohing and aahing as they shared stories of family favorites.

At the end of the journey the tasters wrote down the number of their favorite crock pot.  A few collected copies of  the recipe of their choice for another day. 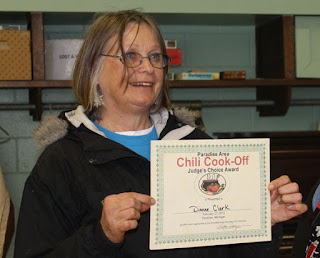 At 3:00 PM the awards program identified the Chili Cook-Off award recipients.  In this first year, two chili chef's were recognized through the Judges Choice and the People's Choice.  The Judges Choice went to Dianne Clark and her Chili Picante. Dianne offered to tasters her Chili 101 curriculum and shared with people information about chili peppers and temperature control of your chili. The People's Choice Award went to Deb and Bill Mangham for their D & B Chili.  Deb shared with the event coordinator, Nikki Craig, that quite often their chili takes on a different flavor, depending upon what herb is available.   Each contestant and taster seemed to be gratified by the experience and encouraged at the possibilities of a 2nd annual event in 2017.
Posted by UP Traveler at 12:20 PM No comments: